King Wellington & The Earth Peeples T-shirt available at Coastal Kitchen with my photo on it.

I took a trip out to Bay Shore, NY for the Arts by the Bay festival today. It’s a very cool street fair with lots of vendors, music, and great food. The vibe in the air is always lively and energetic with everyone in the street buzzing about, dancing to the live bands, and tasting snacks from all sorts of cuisines. Naturally while I was in the neighborhood I had to stop by to see my old friends at Coastal Kitchen. At the end of 2018, I spent some time at their restaurant taking photos for their 12 Days of Reggae festival, and I had a fantastic time. I got to dance and sing along to covers of some of my old reggae favorites, and I learned a lot of new songs as well. 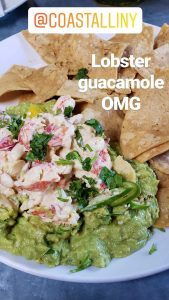 Lobster Guacamole from Coastal Kitchen. Photo from my Instagram stories

I dropped by Coastal to have a nice island-inspired lunch of lobster guacamole with nachos, and good lord was it delicious. I definitely recommend giving it a try, but keep in mind that it’s filling so even though it looks like an appetizer, it’s probably not. Unless you’re sharing with someone, of course. Or you have a big appetite. You know what? You do you. I’m not gonna judge.

So I’m sitting at the bar swooning over my tasty, tasty lobster when I look up, and what do I see? A T-shirt for sale with my photo on it. Not me personally, of course. I’m not nearly cool enough yet to have my face on a shirt. It was a photo I took of King Wellington during the 12 Days of Reggae festival in December of last year. It’s a black shirt with “King Wellington & The Earth Peeples” written on the front, and “Coastal Sunday Funday Rum Punch + Reggae” written on the back.

It was a very cool moment for me because it was the first time I saw my work out in the wild. Anthony, the owner of Coastal Kitchen, gave me one of the shirts. It’s a neat feeling to have your work on display like that, and also to think that people would want to own something that you created. I mean, there are people out there right now who own a shirt with my work on the front of it. I have no idea why, but somehow it almost feels surreal.

If you’re on Long Island, you can pick up a shirt for yourself at Coastal Kitchen, and you can see the show gallery for King Wellington here.