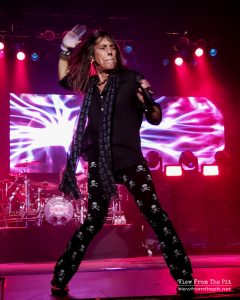 The absolutely lovely folks over at Breaking Glass Magazine have decided, in their infinite wisdom of course, to include my photo of Tesla‘s Jeff Keith in their Best Music Shots of 2018.

If you’ve never seen Tesla play live, Jeff Keith is an absolute hoot. The man spends the whole show not only belting out some of the greatest songs ever, but he’s also miming, dancing, spinning chairs, and just generally having what looks like the time of his life. It’s basically a one man show inside the full band’s show.

But don’t let me make it sound like he steals the spotlight. Definitely not. As entertaining as he is, Dave Rude, Frank Hannon, Brian Wheat, and Troy Luccketta truly hold their own. And while some of the moves seem a little choreographed, like this deal here, that doesn’t make them any less fun. There’s a reason why these men have been around as long as they have. They know how to bring it.

I’d like to send my absolute love and gratitude to Breaking Glass Magazine for including me this year. Also, you can see the show gallery for this Tesla show here.